The U.S. 1910 census for genealogy is my favorite. Most genealogists would probably say the 1900 census is their favorite. It is a good one, after all, it is the only census that gives the month and ‘exact’ year of birth for each person. But if you ask me, the 1910 census is really great and here are four reasons why. 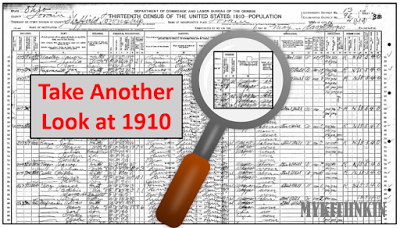 Column 8 of the 1910 census ask the question regarding “Marital Status.” In the past, this column would be recorded with one of the following abbreviations:

a. M for married
b. S for single
c. D for divorced
d. Wd for widow

This is particularly helpful for those wondering or looking for a possible earlier spouse. Further, when paired with question #9, how many years married, you can determine when the first or subsequent marriage happened, and about when the prior spouse died (or left if there was a divorce.)

In this image above, we see James Winn has a “M2” in the marital column. That means he is in his second marriage. In the next column, the number 9 refers to the fact he and Lizzie have been married 9 years. If they had been married for nine years in 1910, they were married about 1901. This information also suggests daughter Florence and son Franklin are not the children of Lizzie because of their ages. (We confirm this in reason #2 below.)

Column 10 and 11 ask how many children have been born to a woman and how many are still living. In the case of James and Lizzie Winn, Lizzie has had “0” children and “0” are living which supports the fact that Florence and Franklin are not her children.

In contrast and shown in the case below, Margarett Cole has had 12 children and only 6 are living.

Finding my great-grandmother Margarett in this census told me I had my work cut out for me finding the names and dates of 6 deceased children. (Learn how I did that, here.)

There’s a ‘secret’ Indian Schedule hiding in the back of the 1910 census. Yep, you read that right. There was a Indian Population Schedule in the year 1910. Complete with its own instructions, this census sheet can be found at the end of the microfilm of a given location if there were those who claimed Indian ancestry.

Not only will you find the name of each individual in the household, their relationship to the head-of-household, their age, marital status, and place of birth, but you will find additional columns indicating their Native American tribe affiliation and percentage of blood.

The 1910 census was the second census to ask immigration questions. Beginning in 1900 and continuing through 1930, the U.S. federal censuses asked citizenship questions. In 1910, the following questions were asked:

Column 15: Year of immigration to the U.S.

Column 16: Whether naturalized or Alien

Column 17: Whether able to speak English; or, if not, language spoken

In this example below, you can see the Nemet (aka Nimeth) family.

Notice, Joseph arrived in the U.S. in 1901 and is listed as an Alien. Rosa (his wife) arrived in 1903 and has no naturalization status listed. This is because prior to 1922, a wife would not “need” to be naturalized. She would acquire ‘derivative citizenship’ when her husband became naturalized.[1]

U.S. censuses are jam packed with genealogical goodies. Take another look at your targeted ancestor with these insights and see if a new clue pops up!