Gradual emancipation in the northern colonies of America created valuable records sets for people of color. You may think the institution of slavery in the United States was only done in the South. That would be incorrect. Slavery was something done in the north as well, however, many of those states abolished slavery long before the Emancipation Proclamation. They did this with acts of gradual emancipation. 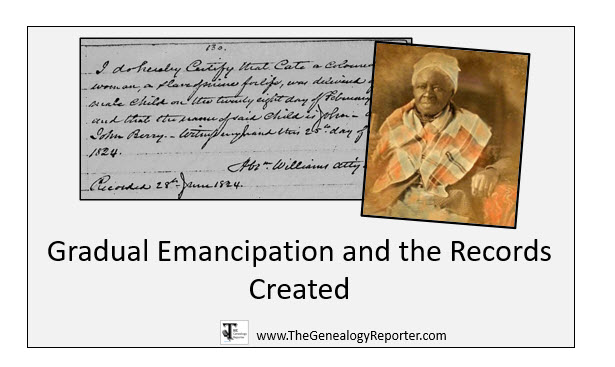 What was Gradual Emancipation?

How did Gradual Emancipation Work?

In 1780, Pennsylvania was the first of the colonies to enact a gradual emancipation. In the act, it was stated that any child born into slavery after 1 March 1780, was to be born free, BUT they were in a state of servitude, similar to an indentured servant, until they were 28 years of age.[1] To enforce this, slave owners were required to record the birth of these slave children at the county courthouse.

New York enacted a gradual emancipation on 4 July 1799. Like Pennsylvania, the enslaved children born after 4 July 1799 would be free, but would be in servitude until they reached the age of 28 for males and 25 for females.[2]

Some slave owners avoided having to register and therefore later free their slaves by taking the pregnant women out of the state to give birth. When these acts were first instituted, the law only applied to those children born into slavery within that given state. By taking an enslaved pregnant woman to North Carolina where such laws might not exist, the owner would not have to free the child later. This type of loop-hole did not last long however.

Which States Participated in Gradual Emancipation?

Where Can Records for Gradually Emancipated Enslaved Persons be Found?

If you are unable to go to the local county courthouse of the state you are researching in, your next best bet is to search the digitized record sets at FamilySearch.org, Ancestry.com, or other online websites. Begin with the FamilySearch collection titled “United States, Slave Birth Records, 1780-1846.”

I also suggest using Google to locate these types of records. Google something like “Pennsylvania slave birth records.” Ancestry has a collection entitled “Pennsylvania, U.S. County Records of Enslaved and Free People, 1780-1834″ that pops up. Here you can search by name and place or browse by county. Below is an example of a birth register for the enslaved of Adams County, Pennsylvania. 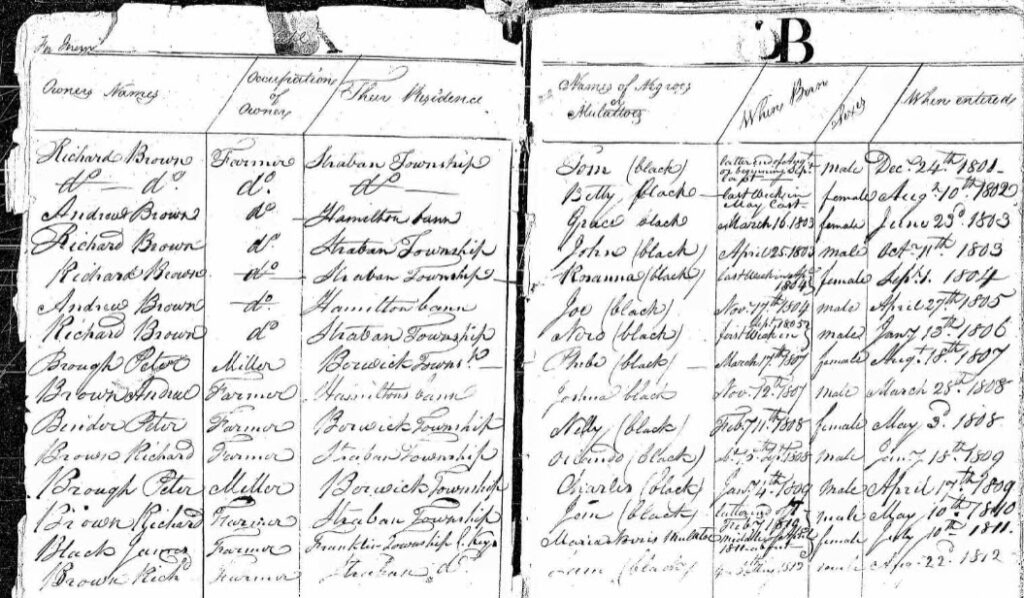 From left to right the columns are labeled, Owners Names, Occupation of Owner, Their residence, Names of Negros or Mulattoes, When born, Sexes, When entered.

Following are some additional notable websites or databases you may be interested in:

Gradual emancipation, like many acts, resulted in unique records being created. These records are filled with genealogical data that will help fill in the branches of your family tree. If you have other helpful online resources for African-American research in the north, please feel free to add a link in the comments below.