To analyze a genealogy record is part of the Genealogical Proof Standard. By learning and applying this skill to both the record and its information, you will glean clues that may have otherwise been overlooked. Here are a few things to remember when you analyze a genealogy record. [Note: This post is meant to be for the beginner and is touching on one aspect of the GPS in a most basic manner.] 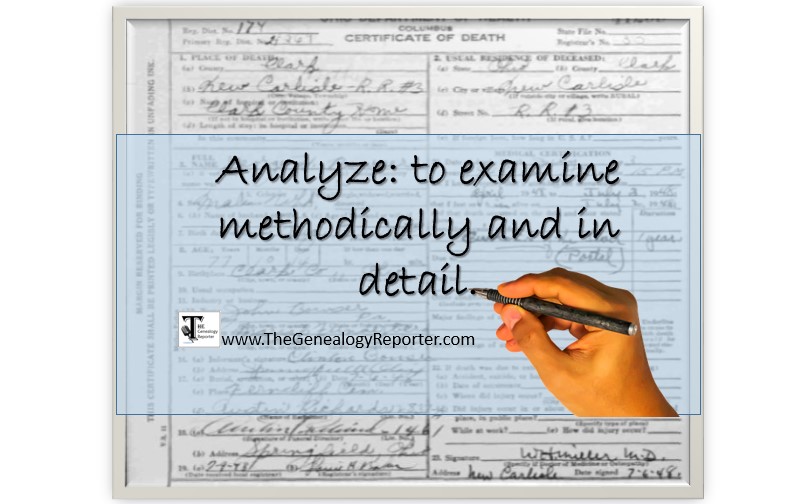 The Board for Certification of Genealogists has published a book titled Genealogy Standards. In it, they discuss the ins and outs of using the Genealogical Proof Standard (GPS) in genealogy research. For some, the book and its language may be overwhelming or intimidating. The GPS includes five components. One of these components reads:

Critical tests of relevant evidence through processes of analysis and correlation facilitate sound interpretation of information and evidence. They also ensure that the conclusion reflects all the evidence, including the best existing evidence. [1]

Essentially, that means that records we use for genealogy should be investigated thoroughly so we can interpret the information there and any information being hinted at. In the following paragraphs, I hope to shine a light on the basic steps of analyzing a record in your genealogy research.

There are two types of analysis. They are source analysis and information analysis.

Source analysis is in regard to the record itself, such as a birth or death record. When you analyze it, you are looking for its “likely accuracy, integrity, and completeness.” [2] In layman’s terms, for each record you might ask yourself the following questions:

Let’s see some analysis in action.

George Henry Bowser died on 3 July 1948 in Clark County, Ohio. His death record can be seen online and it gives a great deal of information. First, let’s look at the record itself and analyze it:

If we had applied the same line of questions to the birth register for George Henry Bowser’s birth and found the record to be legible, readable, created near the time of birth by those with first-hand knowledge of the event, then we would say that George’s accurate birth date is 17 August 1871, not 19 August 1870 as recorded on his death record.

When you analyze genealogy records and information, it will help you “…facilitate sound interpretation of information and evidence” [3] and come to a sound conclusion regarding names, dates, and places for your family history. Why not consider going back over your records and analyze them like a pro! Happy hunting, friends and best of luck!

“Genealogy Standards” book is an affiliate link and I do receive compensation for purchases made via the link.