Blackstone Group Inc. announced yesterday that they have reached a $4.7 billion deal to buy a big stake in Ancestry.com. What does this mean to users of Ancestry? Read here to find out! 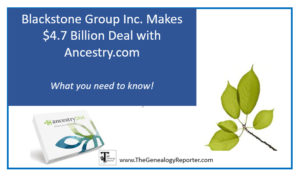 On August 5th, it was announced that Blackstone Group Inc. has acquired a major stake in Ancestry.com. After the deal closes, Blackstone will own about 75% of one of the largest genealogy companies in the world…Ancestry.com.

Now before you get your tail feathers ruffled, you should know that Ancestry.com has changed hands before. You probably hadn’t even noticed and you probably won’t see noticeable changes this time either. Terms of Service and Privacy conditions will stay the same for now and when or if there are changes made, all Ancestry users will be notified.

Will this change anything in the future?

Friend and colleague, Thomas MacEntee, thinks Ancestry will eventually be split into two companies and I see what he means. He says:

Ancestry is really a data company just like Google. Buy out firms like Blackstone are known to see the value in a company based on its assets and they often will spin off and sell off portions.”

Thomas says that splitting off AncestryDNA from the other features of Ancestry makes sense. To see all of Thomas’ thoughts on this buy out, click here.

Should I do anything with my Ancestry subscription or trees?

No, not necessarily. You won’t be losing access to your subscription, DNA test results and reports, or access to your family trees. However, it is always a good idea to be up-to-date on backing up your research, trees, DNA reports, etc.

In the end, many people believe this is a good move on part of Ancestry. What do you think? Leave a comment in the comment section below!