Civil War genealogy research can be filled with twists and turns. There is often a wealth of information you can find on your Civil War ancestors and even their family relationships. Just look at this example of Gordon Johnson.

Gordon Johnson was born about 1827 in Tazewell County, Virginia. He married a woman named Cosby, a name I found quite unique.

I first took notice of Gordon when he didn’t appear with his family in the 1870 census. Cosby was listed as head-of-household with 5 children ages 9 to 17. Where was Gordon? His last child was born in about 1861. Then, I knew. Gordon must have been a soldier in the Civil War.

Men born between the years of about 1821 and 1845 are likely to have been involved in the Civil War. Finding records for them is getting easier with more records coming online everyday.

I was able to follow Gordon through his enlistment day, to his capture by Union forces, and ultimately to his death in a prisoner of war camp. Here’s how I did it.

I created a research plan which included a research question, records I needed to locate, and where to find them. First, I would gather all census data. Second, I would search all the Civil War collections on Ancestry.com, Fold3.com, and FamilySearch.org. I wanted to specifically target his soldier file and wife’s possible pension paperwork. Are you surprised to learn that a Confederate Soldier’s widow may have received a pension? The federal government did not provide pensions for Confederate soldiers or their dependents, but southern State governments sometimes did.

Lastly, my research plan included using Google to find out more about his regiment’s history and details of his time as a soldier.

My next step was to see what was available for Civil War records online. FamilySearch.org has several databases available for Civil War research, however there are not as many as Ancestry.com. FamilySearch.org is free and available to anyone who has created a free account. Ancestry.com is a subscription website, but can often be accessed for free at your public library or local Family History Center.

A basic search for “Gordon Johnson, born about 1827, living in Lee County, Virginia” provided me with lots of records about Gordon. 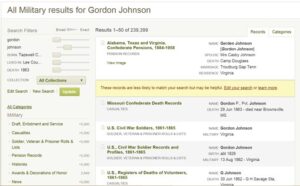 He was living in Lee County, Virginia and was about 36 years old on his enlistment day of 13 Aug 1862. He enlisted in Lee County and served for Virginia, but did not survive the war. Gordon was enlisted in the 64th Virginia Infantry and was mustered out on 26 Dec 1863 at Camp Douglas, Chicago, IL.

It is very important when doing any research, to make sure you “have the right guy.” In this case, Gordon is the ONLY “Gordon Johnson” born about 1826 who was living in Lee County, Virginia. I found further evidence this was “my guy” in the record found in the Alabama, Texas and Virginia, Confederate Pensions, 1884-1958 in which his widow is named as Cosby Johnson.

The application for pension filed by Cosby was only one page, but in it she stated she and Gordon had married in Mulberry Gap, Tennessee. A quick google search showed Mulberry Gap to be in Hancock County. Hancock County courthouse had a fire and marriage records between 1844 and 1930 were lost. Because of this loss, it is likely this pension record is the only record that states the exact location they were married. That was a great find!

Fold3.com is a subscription website that is dedicated to digitizing records found at NARA (National Archives & Records Administration).  Many libraries and Family History Centers allow their patrons to use this site from their location.

I did a Civil War search for Gordon Johnson at Fold3.com and found 17 pages in the “Compiled Service Records of Confederate Soldiers Who Served in Organizations from the State of Virginia” file. It confirmed Gordon Johnson was in Co. G of the 64th Virginia Mounted Infantry and enlisted in Lee County, Virginia for 3 years.

New information included he was captured at Cumberland Gap, Tennessee on 9 Sept 1863. He was sent to Camp Douglas [Illinois] on 24 Sept 1863 via Louisville, Kentucky and died there on 26 Dec 1863 of phthisis pulmonalis, another name for tuberculosis. At that time, Gordon was buried at Chicago City Cemetery in grave #918. His wife filed a claim on 12 July 1864 suggesting that she had been given word of his death at least within 6 months.

Step 4:  Google search about his regiment and imprisonment at Camp Douglas

A Google search for “64th Virginia Mounted Infantry” gave me many great articles. After selecting those I believed were most accurate, I learned a lot.

The 64th Virginia Mounted Infantry was recruited from the Virginia counties of Lee, Scott, Wise and Buchanan. They were allowed to stay in their home area as long as they promised to protect the Confederacy. The regiment did not see much “action” or bloodshed, but their mortality rate was high due to their dying of disease as prisoners of war.

Two thirds of the 64th regiment were captured on 9 Sept 1863 at Cumberland Gap, Tennessee.

The winter of 1863 and 1864 were some of the harshest on record. Cold temperatures, lack of food, no adequate clothing, and disease ravaged the camp. Camp Douglas was considered the worst Union prisoner of war camp. By the end of the war, Camp Douglas had housed over 26,000 Confederate prisoners.

Soldiers who had died at the camp were first buried in the Chicago City Cemetery. Because of flooding, in 1866, the soldiers were uninterred and removed to Oak Woods Cemetery in a large mass grave. A monument stands there and reads “ERECTED TO THE MEMORY OF SIX THOUSAND SOLDIERS HERE BURIED WHO DIED IN CAMP DOUGLAS PRISON 1862-5.” 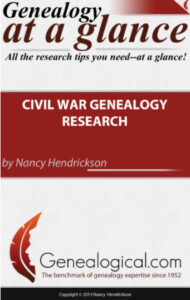 Finding information about your Civil War soldier, whether Union or Confederate, can illuminate the story of your ancestor’s life. If you have an ancestor who is the right age to have served in the Civil War, take the time to create your own research plan and see what new information you dig up! To help you even more, consider using the “Genealogy At a Glance: Civil War Research” laminated quick-guide from Genealogical.com.

Free webinars at RootsTech.org on doing Civil War research in the U.S. include:

“Lost a Civil War Soldier? He Might Be in Australia!”

“Pilots, Spies, and Soldiers: How African Americans Turned the Tide of the Civil War”