The Julian calendar was used before our current Gregorian calendar of today. This sometimes led to double dating in early colonial American records. Understand how the system worked and how you can apply it to your genealogy research and pedigree charts. 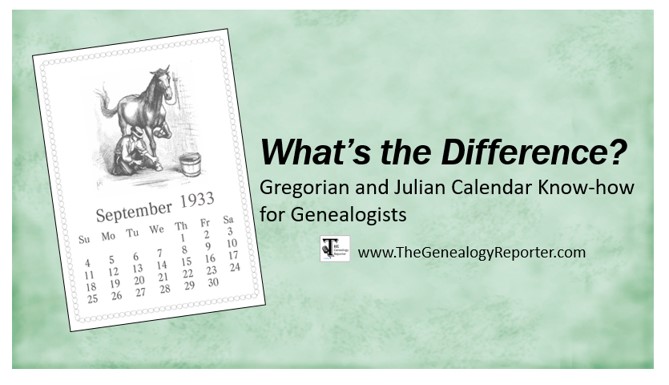 What Does the Term “Colonial” Mean

When we use the word “colonial,” it refers to a time when there were colonies in the now United States. This would be the years between 1607 when Jamestown was founded, and 1783 when we won our independence.[1] There is a period of time between 1783 and 1799 which some might call “colonial,” but this time is actually considered post-colonial.

Calendaring in the colonial times was different than our system today. Today, we use the Gregorian Calendar. The Gregorian calendar year is based on the Earth’s rotation around the sun and lands our New Year’s Day on January 1st. However, prior to 1752, England and her colonies used a different calendar. That calendar system was referred to as the “old style” or “Julian Calendar” which began the new year on the 25th of March.[4]

A quote from an article entitled “The 1752 Calendar Change” at the Connecticut State Library’s online page really helps to put things into perspective.

“Between 1582 and 1752, not only were two calendars in use in Europe (and in European colonies), but two different starts of the year were in use in England. Although the “Legal” year began on March 25, the use of the Gregorian calendar by other European countries led to January 1 becoming commonly celebrated as “New Year’s Day” and given as the first day of the year in almanacs.

“To avoid misinterpretation, both the “Old Style” and “New Style” year was often used in English and colonial records for dates falling between the new New Year (January 1) and old New Year (March 25), a system known as “double dating.” Such dates are usually identified by a slash mark [/] breaking the “Old Style” and “New Style” year, for example, March 19, 1631/2. In general, double dating was more common in civil than church and ecclesiastical records.”[5]

The calendar change-over happened in 1752 in colonial America. This change required a series of steps:

Example of the Use of the Julian Calendar for Genealogy

Imagine you are looking at a public record and court is held on 28 December 1678 and the next record is listed as 1 February 1678. Then, you have a record from 2 Apr 1679. You may think they are out of chronological order, but they are not. They have actually been filed correctly. December 1678 was followed by January 1678, then February 1678, and the year 1678 continued through the 24th of March. On 25 March, the year would change to 1679.

To delve into more information on researching the early colonial American time period, watch or download these webinar titles from Legacy Family Tree Webinars. [Costs may apply, click on title to learn more.]

Colonial Immigrants: Who They Were and Where They Came From

[1] “History of the Colonization of America and the Original 13 Colonies: Colonial America Timeline: Establishment and Settlement of the 13 Original Colonies,” Colonial America (http://www.landofthebrave.info/colonial-america-time-period.htm: accessed 22 July 2015.)