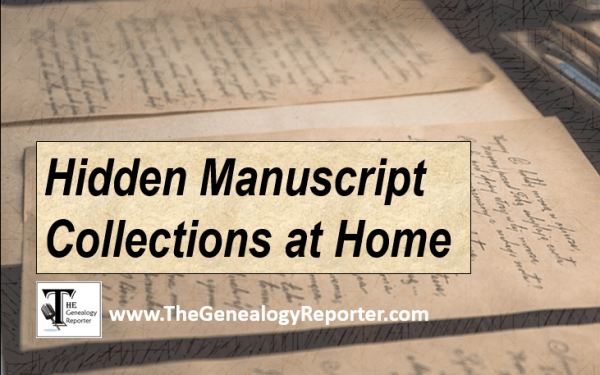 This past weekend, I had the privilege of attending the Ohio Genealogical Society Annual Conference. Among several wonderful classes was one presented by J. Mark Lowe. It was on finding and using manuscript collections. The entire time, I was thinking about all the many manuscripts we genealogists have in our own possession…like the amazing hidden letters my friend found in the walls of his home.

Letters from the 1800s Hidden in the Walls

A friend of mine decided to remodel his old farmhouse. When he opened the wall in the dining room, he found two, handwritten letters dated 20 Nov 1862 and the other on 17 Jan 1875. What a find!

In each letter, the boys express their love of home and hearth. Both mention the letters their parents were sending to them, suggesting a close parent/child relationship.

The first letter was from E. N. Brecount. E. N. is recorded as “Edward” in the 1850 Brown Township, Miami County, Ohio census in the home of his parents, Miles W. and Ann Brecount.[1]

Edward’s letter heading reads “LaGrange, Tennessee” and is dated 20 Nov 1862. He is a Civil War soldier. Edward’s regiment is on picket duty. He talks of the poor condition of the Confederate soldiers they have captured, and mentions how poorly they are dressed in such cold weather. He tells his mother and father that he is so well-taken care of with clothing that it is almost a burden to carry. He has been issued three gray wool shirts, two pairs of pants, one jacket, one blouse, one dress coat and “lower coat,” two pairs of “drawers,” two pairs of socks, and two blankets. He states, “I think that is a load for any man of 160 lbs.”

Edward is hoping for a commission, he continues. He also mentions however that commissioned officers are required to purchase their own clothes, arms, and rations which might be a worry to him. He talks about needing to pay the taxes on his land as well. Even while at war, it seems he had his home obligations on his mind.

In the last sentence, he wrote he had “not received the letter promised by that Lady I am anxiously awaiting.” Sadly, he may never have gotten that special letter. Edward died just eight months later on 12 July 1863 in Jackson, Mississippi.[2] Because the Battle of Jackson took place in May and his death date is not until July, I suspect he may have died from injuries sustained during the battle, or perhaps became sick.

His letter is from Alexandria, Minnesota and dated 17 Jan 1875. He writes that he is sick with a cold and sore throat. He is a minister and a teacher, forced to take two jobs to earn the money needed to start a home.

Charles misses his family very much and wants to come for a visit, but is worried that it will be too hard to return to Minnesota. He feels it was “providential” to have moved to Minnesota, however. The congregations are large and he loves them.

In his final paragraph, Charles announces his impending marriage in April to a “good Christian girl.” He remarks that she will be 17 and that she weighs “129 ½ and is about the height and shape of Alice Shidler.” I thought I was going to fall off my chair laughing at a description that includes her weight, down to the half-pound! He further says her family is from New York and she is of light complexion and brown curly hair. He never mentioned her name.

Searching Out Manuscript Collections for Genealogy

After some digging, I found that Charles had five children. His family lived their lives in Minnesota. However, these wonderful letters aren’t in Minnesota, are they? They were found and still reside in Ohio. When searching out manuscript collections, J. Mark Lowe suggests we do not limit ourselves to only one state or location. Further, he reminded us that not all manuscripts are institutionalized, meaning they will not all be found at an archives, library, or other repository. In fact, many wonderful records exist in our basements, attics, and in our living room bookshelves.

Unlike my friend, I have never found any hidden letters in the walls of my home. I do have some treasured correspondence between my father and his parents when he lived abroad. Among other things, I have certificates, diaries, receipts, and graduation memorabilia.

In my own case, I have not been exceptionally good about caring for and sharing my personal manuscript collection, but I would like to be better. Here are 5 tips we can both take to get our collections in order.

I wish you all the best in your endeavors to preserve and share your family history. It is a worthwhile goal and maybe by doing so, you will find a missing piece of information to finally break that brick wall in your genealogy research.

Why not include the kids in your preserving your manuscript collection? Here are some other fun ideas to do family history with kids: “Trying to Stump Big Grandma & Other Family History Fun with Kids.”

This article by Amie Bowser Tennant first appeared in it’s original form at the RootsBid.com blog at www.rootsbid.com/blog. It has been modified as it appears on The Genealogy Reporter today.