Learning about migration routes can help you overcome obstacles in your research and uncover previously untapped resources. 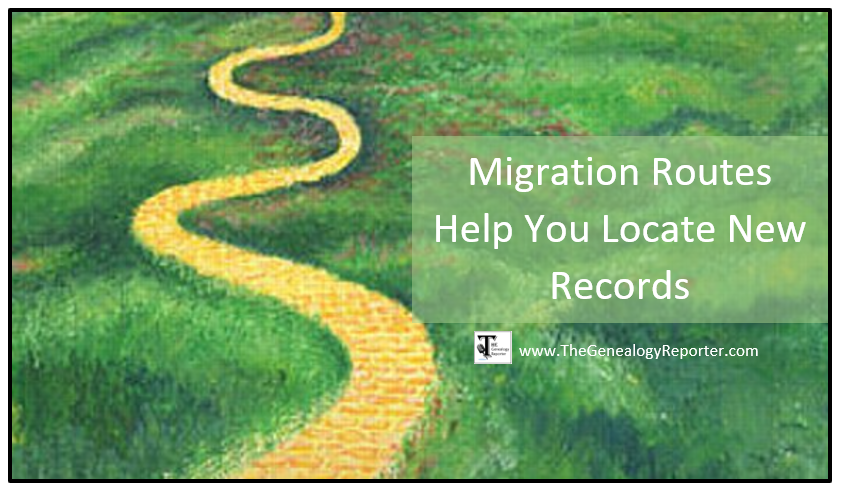 As long as Dorothy stayed the course of the yellow brick road, she would ultimately find Oz and her way back home.  Just like Dorothy from The Wizard of Oz, you too have a yellow brick road!

In genealogy, migration is the genealogical term used to indicate a move from one location to another within the same region or country.  The word immigration is used to refer to leaving one’s country and moving to another country. In this article, we are going to talk about early migration routes in the eastern half of America and the people who used them.

The First Roadways in America

Travel and the modes of migration have changed throughout time.  When the first European’s arrived in the New World, they settled and stayed near the coastal areas.  Trails were used by the Natives to transverse the inland areas, but they were not wide enough for wagons.

Soon our forbearers were anxious to have land of their own and began moving and settling in all directions; roadways were needed.[1]

As these settlements popped up, roads were constructed to connect them. The first main road in the New World was the Kings Highway, otherwise known as Boston Post Road.  Boston Post Road was built in 1673 for the purpose of carrying mail and other important documents between New York and Boston.[2]

By the 1730’s, the Kings Highway expanded southward to Charleston, South Carolina. If you had ancestors migrating from the North to the Carolina’s during these times, they may have taken the Kings Highway. Pioneers using this road might have passed through Baltimore, Fredericksburg, Norfolk, and Georgetown.

In 1735, Fall Line Road forked off of Boston Post Road at Fredericksburg, Virginia and was one the first roads to lead further inland, away from the coastline. This road would have led to the towns of Raleigh, Fayetteville, Camden, and even Augusta. By 1831, the road extended all the way to Montgomery, Alabama.

In 1765, The Great Valley Road was clear enough for wagon travel. It started in Philadelphia, Pennsylvania and passed through the Shenandoah and Tennessee Valleys and ended in Knoxville, Tennessee. It also forked in Roanoke, Virginia and could be taken further south to Salem, Charlotte, and Augusta. 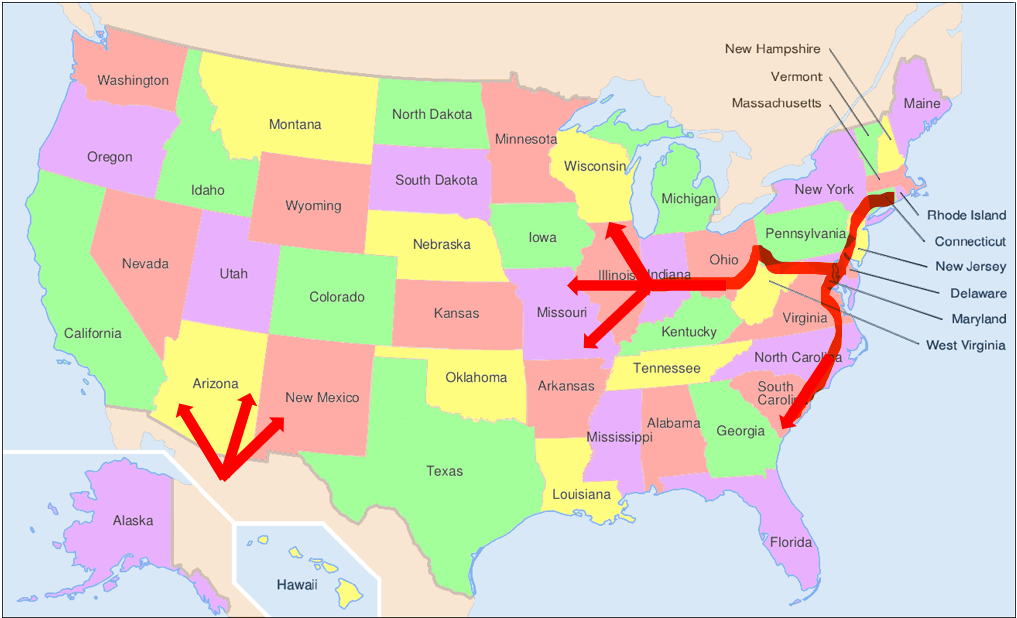 In 1796, Ebenezer Zane petitioned the government to complete a road that would connect Wheeling, Virginia to Limestone, Kentucky. It was more like a trail than a road and was not properly cleared until 1804 when the road was widened to 20 feet across and could be used by wagons.[3] It was called Zane’s Trace.

By 1818, the first section of the National Road was completed. It started in Baltimore, Maryland and ended in what is now Wheeling, West Virginia. As the National Road was extended it finally reached Zanesville, Ohio and intersected Zane’s Trace. Now, pioneers from the North could not only travel further south into the Ohio regions of Chillicothe and Maysville, but due west into current day Columbus and Springfield, Ohio.

What Groups of People Went South

English descendants made up a large percentage of the settlers in colonial South Carolina.[4] These settlers landed on the coast by boat. Surprisingly, many came by way of Barbados and not necessarily directly from England. Barbados financed some of the first British expeditions to South Carolina in the 1660’s.

In 1671, a group of Dutch from New York also traveled to the South Carolina region and Huguenots made settlements at Goose Creek, Orange Quarter, St. John’s Berkeley, French Santee, New Bordeaux, and Purrysburgh.[5]

What about the Tennessee Valley and Cumberland Gap areas? The great Appalachian Mountains posed a threat to westward migration into these areas. The Great Valley Road leading into the Tennessee Valley and The Wilderness Road passing through Cumberland Gap were the most important roads in settling these interior mountainous regions. The Great Valley Road is sometimes referred to as the “Irish Road” due to the large number of Scots-Irish travelers.

The early settlers into the Northwest Territories and Kentucky traveled by roads and water ways.  In particular, the Ohio River to the south and Lake Erie to the North were of great value and ease of travel.

Though accounts of early migration may be few, you may be interested in reading a journal by Mrs. Mary Dewees. Her journal tells of her traveling from Philadelphia to Kentucky in 1788. I enjoyed it very much! (Read her journal, here.)

Large numbers of German’s settled the areas of Ohio, Indiana, and Illinois. Many came from Pennsylvania and you can see their influence in the high numbers of Mennonites, Amish, and German Baptists in these states.

I used this information to plot the migration of my Walls ancestors from Delaware to Pike County, Ohio in about 1795. I speculated they left Delaware in 1795 and traveled west on barely more than trails until they reached Monongalia, Virginia where my fourth great-grandparents were married about 1804.[6]

I had done a fairly exhaustive search for Levi Walls in Ohio records, but I wanted to see if using this migration information would help me find additional records or information. Did this family have vital events like births, marriages, or deaths happen along their way? Did they stay in one area long enough to pay taxes?

I searched the Virginia Tax Lists found at BinnsGenealogy.com. I was delighted when I found that Levi appeared in Monongalia, Virginia by 1790! I guess they left Delaware a little sooner than 1795!

What more can you learn about your ancestors when you plot their migration routes? You will never know until you try!

[6] “Leeth Creek Lady Subject of Interview,” WaverlyNews, 4 Jul 1973, Xerox copy of the article found in loose papers of a Walls family scrapbook, newspaper citing the original interview published in the Pike County Republican, 20 Feb1874; Garnet A. Wilson Library, Waverly, Ohio, 2012, Interview and timeline say they were married in Virginia and suggests a marriage year of 1804 but it is not specified.