Were your proposals rejected by a genealogical society or group for an upcoming genealogy conference you hoped to speak at? Are you wondering why? I was recently sent a rejection letter after applying to speak at the Ohio Genealogical Society Conference for 2020. I know why rejection happens, but some potential speakers don’t and that can be really discouraging. I want to share a little about why your proposals may have been rejected for a genealogy conference. 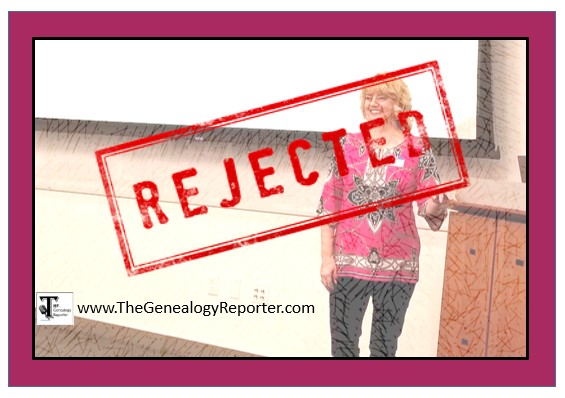 Two years ago, I joined the conference committee of the Ohio Genealogical Society and last year, I was the co-chair. I learned there was a lot going on behind the scenes that I had never realized before. It was in 2017 that I started to interview other genealogy societies and groups about how they run their conferences. With all the information I have collected over the last 2 years, and my own hands-on-experience, I am writing a few blog posts I think will shine a light, and hopefully some understanding, on what goes into planning a large genealogical conference or event.

How are Genealogy Speakers Chosen for an Event?

First, the organization puts out a “Call for Papers.” This might go out on their social media outlets, their newsletter, an email list of past speakers, or maybe be placed online at Conference Keeper.

Second, speakers send in proposals of a topic they would like to speak on. Generally, the call for papers includes a list of topics that the organization is looking for. Speakers try to offer proposals that fit that criteria.

Anywhere between 4 to 8 months before the said conference, a person or committee gathers together to pick the speakers/topics for their conference.

The committee is usually composed of genealogy minded individuals, but not always. I have interviewed more than one group that report not all their committee members are “into genealogy.” Personally, that seemed a little strange to me. It is hard to understand how persons who are not actively involved in the genealogy community could possibly know what speakers and topics would be best for their attendees, but that is just my opinion.

Before the general topics and speakers are chosen, the keynote speaker(s) have probably already been chosen in advance. A keynote speaker or speakers is usually someone with a lot of what I call “public pull.” Someone with genealogy known-how, well known, and generally pretty “popular” in the field. Further, if there will be any luncheons provided at the conference, the committee may begin with picking other top genealogy speakers to fill the luncheon speaking assignments. This makes sense because the society/group is literally banking on the fact that many people will pay for the luncheon so they can hear so-in-so speak. [More about why attending luncheons is so important in another article]

And, there we are. Several speaking spots have now been filled and the committee hasn’t even gone through half the speaker proposals!

At this time, the committee is ready to look at the bigger picture. How many classes need to be filled, what days, and what are the topics or tracks for each day? Prior to attending this planning meeting, committee members have likely poured over the speaker proposals and decided on several “favorites.” They may start with their favorites to fill in the gaps, then when they have exhausted those, they move on to other proposals that fit the topics they are looking for.

That brings us to the big question “Why was I rejected?” There are literally dozens of reasons, but from my experience, it is usually one of the following:

And, there it is. These reasons and probably a dozen more are why speakers are sometimes rejected. I think the most important thing to do after receiving a rejection letter is to not speculate the “why” too much. Try again and keep trying. Keep sending in those proposals! P.S. Pop  over to Conference Keeper to learn about any recent call for papers!