Can you translate foreign records for genealogy? Family letters and records can often provide details about a family found in no other source. But what can you do when these items are written in an unfamiliar language. Here are three ideas you might consider if you have foreign family letters or records in need of translating. 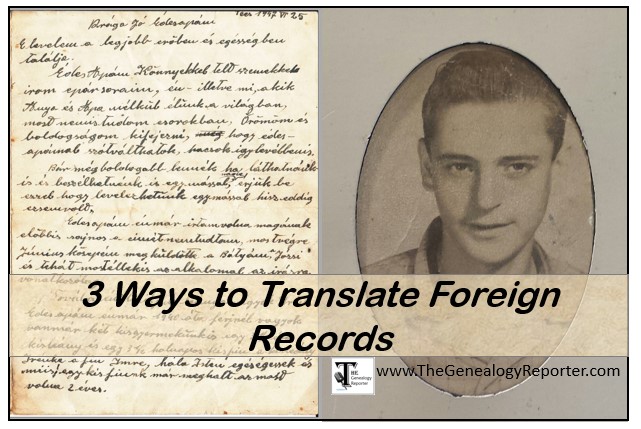 About a year ago, my cousin contacted me to do some genealogy work for her father’s Hungarian family line.  At that time, she knew her father’s parents were Joe and Lillie (Eldridge) Nimety of Lee County, Virginia. She had been told that Joe had a family before marrying Lillie and there were children born to that union. She hoped to connect with these children and introduce her father to his half siblings.

After doing a traditional genealogical search on the family, we were only able to learn Joe’s first wife was named Mary Super. [1] There had been at least 2 children in the family according to Joe’s WWII draft card, but we didn’t know their names.[2] Just when I was about to give up finding any further information about these children, my cousin approached me about two family letters she had in her possession from 1946 and 1947. She wondered if these letters held some much needed information, but they were written in Hungarian.

Getting Help to Translate Foreign Records for Genealogy

There are actually several tools a genealogist can use for assistance in translating records. Today, I am going to share with you three suggestions that might be useful.

1. Google Translate. In the past, I had been very successful using Google translate to interpret Dutch birth and death records. Fortunately, the Dutch handwritten records were of the best handwriting. Copying each letter of each word, I painstakingly typed several words at a time into the Google translator. It worked great! Google Translate can often work great for small records or a few key words. However, when I tried to translate the Hungarian letters of my cousin, it wasn’t making any sense. I supposed it may have to do with a dialect difference and some bad handwriting. Whatever the reason, I was going to need to try a different route for translation.

2. Contact a Local Genealogy Group or Society. Many local genealogy societies can be found in any given area. Sometimes, there will be a group dedicated to a nationality. For example, the German Genealogy Group near my hometown is active in helping their members translate German records. Unfortunately, I couldn’t find a group of Hungarian genealogy researchers near me.

To find such a group, I suggest using Google. You might Google something like: German Genealogy Group Ohio. If that does not provide results, contact your local state genealogical society and ask what groups they know of that might specialize in your targeted language.

3. Social Media. Lastly, I turned to social media. As of September 2017, there were 2 billion users of Facebook each month.[1] That’s a lot of people! I singled out a specific kind of person on Facebook. Do you that many Mormon youth (members of The Church of Jesus Christ of Latter-day Saints) go on foreign missions and once returned, they are often happy to use their language skills for a good cause? I posted on Facebook, “Attention all my Mormon returned missionaries! Does anyone speak Hungarian?” Sure enough, in just a couple of days I had a response. A friend-of-a-friend served his mission in Hungary and would be happy to translate the letters for us. I emailed the scanned letters and in a short time we had our translations. Want to see what they said?

I give thanks to God that I am well now. From the bottom of my heart I wish good health and lots of luck to you and to my stepmother and siblings.

I am happy to tell you that we have endured this difficult war with the exception of poor Liysa. God rest her ashes. She was killed in a bombing.

Please don’t be upset that I haven’t written much but the winds of fate have again separated us from each other and I didn’t know your address.

I found my little sisters. Thank God they are also well. They have both married. Vilma has a small family; one boy, one girl. Iren has a little girl. My little girl is five years old. You have four beautiful granddaughters here in Hungary who all send kisses to their grandfather, who they may not see in this life.

Dad, I don’t want to beg because I understand your situation as well. I know that it is difficult to provide food for a family even in America. But I am finally able to search for work if there were any. I am a [something similar to a central heating and or plumbing] contractor’s assistant. Unfortunately, it is not possible to get along here in Hungary. I don’t say this to complain. To this point in my life I have not starved, even now with no work. I ask just one thing of you; that you find my birth certificate and send it to me. I believe you can find it in Mount Morris, Michigan as that’s where I was born. I hope that will enable me to travel to America for work. I would not be a burden on you for a single minute. I am able to find my own place and work. Thank God I am healthy and I wish the same for you, dear father.

Again, I ask just this one thing. Find my file and send it to me. And, if you are in excellent material standing, help me to collect the money to come there, God willing, I’ll make it to America and give back what you’ve given me. If you cannot do without, even a few dollars would help. The dollar is very valuable here.

Dear father, I must end my letter. Lots of kisses to my whole family. To you, to mom, to my siblings.

Jozsef Joska, Monci, my wife and Ersik, my little girl

Dear Dad, I hope this letter finds you in the best of health and strength. I write these few lines with tear-filled eyes. I, rather we, live in a world without mother and without father. These rows don’t allow me to express the joy and happiness I feel at exchanging words with my dear dad, if only in letters.

Of course, I would be happier if we could see each other and speak with one another. But I am so happy to be able to write to you. After all, not even this was possible until now. Dad, I would have written much sooner but, unfortunately, I did not know your address. My elder brother, Jozsi, finally sent it to me in mid-June.

I am your youngest daughter, Iren. I have been married since 1940 and now have two children. We have a 3.5 year old daughter and a 3.5 month old son. Our daughter is named Irenka and our son is Imre. We thank God they are healthy. We had one son die who would now be 2 years old.

Dad, how is your health? Write more about your life. Are you alone or do you have someone? I hope things are better for you there than they are for us here. Besides our health we don’t have much to be happy about.

My husband, Jani, is a machinist with a few jobs going. It is very difficult to be happy in our current situation. He is overcome with bills that need to be paid. We hope the situation will someday be better.

First off, I need to ask your forgiveness for calling you Dad so confidently despite our not being familiar with one another. Getting to know each other gives me endless joy, even if it is only through letters. We could do it better in person but that seems nearly impossible. I’m happy to have this much.  I write these few lines in silent faith and with eager hopes that my father-in-law is in America and when this is over we will live in milk and butter. But it feels good to be able to write these few sincere lines.

I have undertaken the role of a spouse in your lovely daughter’s life. I express my complete satisfaction with her as a good wife and mother. Charitable children come from charitable families and so I ask you to accept my sincere appreciation and respect.

We are going to prepare a family portrait and will send it in the next letter so that you can see your grandchildren as well. I would also ask, if it is within your power, please obtain and send my wife’s birth certificate. This isn’t urgent and please don’t postpone your next letter for it. In case you need the information, Iren was born 24 Mar, 1920 in Virginia. For now we bid farewell and send out kisses with love.  We await your reply.

Irenka sends kisses to her grandfather

As you can see, these letters held the information we needed. We not only learned about two children, but at least one more. They are Jozsef, Vilma, and Iren. Sadly, someone in the family named Liysa had been killed in a bombing. We have speculated this was a fourth child of the couple, but have been unable to confirm that.

We also learned that though these two children were born in the United States, it seems they went back to Hungary after the divorce of their parents. Now, they were desperately looking to obtain copies of their birth certificates, perhaps to gain entry into the U.S.

Do you have old letters or documents that may hold clues to your family history mysteries? If so, don’t wait any longer. Try one of these three ways to translate foreign records for genealogy, today!