Using poll tax records for genealogy is great alternative to when you are unable to find your family in a census or other records. Though these records may not exist for all locales, there is a good chance you might find something in the way of tax rolls to help you in your family history research. 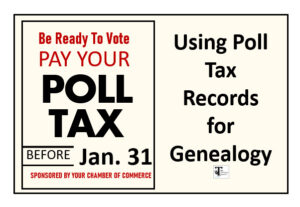 Poll taxes have been around for centuries. Before the United States was formed, the colonies paid poll taxes. Later when the States were formed, many of the individual states collected a poll tax which wasn’t always tied to voting. Sometimes, it was more like a person tax.

Generally speaking though, a poll tax is a tax collected for the right to vote. It is most often associated with keeping the African-American and the poor from being able to vote.

After the Civil War, many African-Americans began to run for office and serve in numerous civil responsibilities. In 1870, Congress passed the 15th Amendment which stated that citizens are allowed to vote without regard to race, color or prior history of servitude. This amendment was not supported by many southern states. Eleven states in the south, and even some northern states, started imposing a poll tax. The 11 southern states included Alabama, Arkansas, Florida, Georgia, Louisiana, Mississippi, North Carolina, South Carolina, Tennessee, Texas, and Virginia.

The poll tax varied from state to state. You can find these differences listed in the state statutes. Generally speaking, a person over the age of 21 had to pay the poll tax to register to vote or provide a receipt of having paid the poll tax. Some states required voters to pay poll taxes a few years before they were eligible to vote. In other states, it was required to pay poll taxes retrospectively.

In 1962, the House of Representatives passed the 24th Amendment which outlawed the poll tax as a voting requirement for federal elections.

Here is an example of the statutes for Louisiana pertaining to the poll tax in 1897. [ Louisiana, online book, Google Books  (www.GoogleBooks.com : accessed 26 Oct 2020); Revised Laws of Louisiana Containing the Revised Statues of the State (Official Edition, 1870) as Amended by Acts of the Legislature, from the Session of 1870 to that of 1896 Inclusive, and All Other Acts of a General nature for the Same Period: All Annotated with the Decisions of the Supreme Court of Louisiana Contained in Anuuals 39to 48 and a Part of 49; 1897, page 821.] 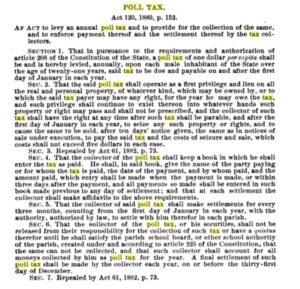 You can find poll tax records online at FamilySearch.org, Ancestry.com, or on a county or state genealogical society or historical society webpage. If you find that your online search queries are fruitless, try contacting a local library in the vicinity of where your ancestor lived. Many of these types of poll tax records were published as abstracts or transcripts in books. You might also try the Auditor or Probate Court of the targeted county for original records.

Poll tax records for genealogy may contain information like full names, birth dates, occupation, residence, or even luxury items or income being taxed.

Take a look at this poll tax record from Chilton County, Alabama. Notice that the woman’s maiden name has been crossed out and her married name added. The record also lists her birth date, current residence, when she first registered, and which years she paid the poll tax! 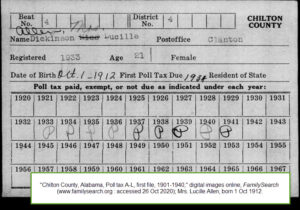 Learn More About Poll Tax Records in the United States

You can learn even more about using poll tax and other tax records for your research. Try these FREE resources:

If you have a subscription to Family Tree Webinars, be sure to watch these classes! [Subscription needed, or do a one-time purchase.]