When you tell your relatives you are doing the family genealogy, it doesn’t take long until all sorts of family stories come out of the wood work! But researchers beware. To help, here are some traditional family stories you may have heard before and why they may not be true! 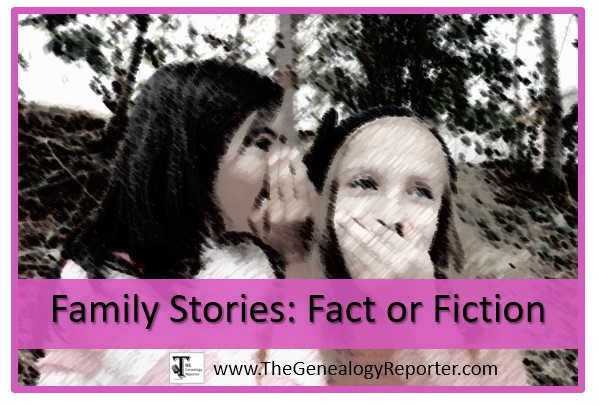 Castle Garden was the first immigration center in the U.S. and was open between 1855 and 1890.[3] It was located in New York at Battery Park in Manhattan.

Though New York Harbor was the most popular of American ports of entry, it is not the only port of entry. Philadelphia, Baltimore, Savannah, New Orleans, and San Francisco were also on the list of U.S. ports.

In my own research, I have found only one immigrant that entered through New York. In all other cases, the two most common ports of entry were Baltimore and Philadelphia.

Passenger lists for Philadelphia and Baltimore can be searched directly from Ancestry.com. If you suspect your ancestor may have entered from either of those locations, I suggest you search the database directly verses a broad Immigration and Travel search.

When debunking an immigration myth, use a year to determine what ports were open and don’t forget to consider smaller, less well-known ports.

Tip: Another common immigration path, especially for the Irish, was to arrive in a Canadian port such as New Brunswick or Quebec and then come across the border to the U.S. via land.[4]

Proving Family Stories of a Surname Change at the Immigration Station

Families from foreign countries may guess their surname was changed when their ancestor arrived at a U.S. port and passed through an immigration station. They may base that assumption on the passenger list they found listing their ancestor with a similar, but different surname than expected.

Passenger lists were typically made by the ship’s captain before arriving in the U.S.[5] If you found a passenger list, the name recorded on the manifest is likely the name the immigrant gave to the captain at the time of departure. Yes, a captain could have misunderstood or spelled the name incorrectly. It is more likely the immigrant changed their name after arriving and settling in the U.S. for a time.

Immigrants often Americanized their first and last names. Many immigrants simply changed their names to “fit in.” Another reason could be to avoid prejudices against a particular ethnicity in the vicinity where they hoped to settle. It is unlikely your ancestor was forced to change their name upon arrival at an immigration station and even less likely they changed their name prior to arriving in America.

It seems this is a common story in many families. Proving your U.S. Native American heritage can be done through a paper trail and solid research. It cannot be accomplished through DNA testing at this time. [See “Why Your DNA Results Didn’t Show Your Native American Ancestry.”

Dark hair and high cheekbones do not make your ancestors Native American. Many people have dark or olive toned skin.

The Cherokee princess myth is a big one, too. I get uncomfortable when someone tells me their ancestor was an Indian princess. Why? Because there was no such thing as a princess in Native American tribes. They could have been a chief’s daughter or an honored woman of the tribe, but the Native American’s did not have royalty.

Some family stories can be easily and quickly debunked by checking a few dates. For those stories that have embedded themselves deeply in your family traditions, take the time to research and get the story right. Remember, when sharing your new findings, you may ruffle a few family feathers. Some of the family stories are guarded close to the heart, so make sure you have the proof to back them up!

To learn more about exhaustive research in proving family stories, see “Reasonably exhaustive” research as a process of elimination,” by Michael Hait.